While Skyrim is an “ok” game, it could be so much more. This makes me sad as I just see a ton of wasted potential in it. In my opinion, if you strech it, I´d give it a solid 7/10. Now while this isn´t that bad of a rating, it´s defenitely contrary to what a lot of other sources say.

How come? Well I´d say everyone looks for something particular in a game, most people found it in Skyrim. But I miss it, and I know others do too. So let´s dive into it. Quicksave and quickload are disgustingly cheesy. It should be removed and replaced with a proper savepoint system. These savepoints also could act as waypoints. And I can already hear people pulling a specific argument out of their asses: “Duuuh y u gun mak Skyrim into Dank Souls??!?!111 o_o” This has nothing to do with Dark Souls, shut your piehole and listen. I hated quicksaving and quickloading loooong before Dark Souls was a thing. I hated it when I played Thief for example.

Beeing able to basically Ctrl+Z at any point at any time any amount of times I want to just is wrong. What kind of fucking omnipotent beeing is the player? It takes away any kind of challenge, any kind of tension there could be simply because you can just zerg the fuck out of every single enemy if you want to with no repercussions at all? How often were you genuine and went to prision in Skyrim for stealing or murdering? I know… fucking never because you would just reload. What´s even the point? And don´t say now “Well if you don´t like it, just don´t use it”. Because fuck you. Players will always gravitate towards the most effective way. It´s called dominant strategy. You know that one completely broken character or spell that everyone and his grandma uses just because of how broken it is? Yeah, it´s exactly that.

Great, now instead of hitting a Draugr with your iron sword 10 times, you now get to hit a Draugr Mastablasta with your daedric sword 15 times. And you will never ever be able to kill a Draugr Mastablasta before you yourself reached a certain level. What´s the point of leveling when nothing fucking changes except some tacked on shit that doesn´t matter? It´s always the same, there´s no (read: very rarely) underleveled enemies you can sweep the floor with or overleveled enemies that fuck you up. Skyrims difficulty curve is so bland that I don´t even need a graphic program to show it to you… look:

This is Skyrims difficulty curve. See the flaw? It´s not a fucking curve ya dingus.

I know that there are some enemies in Skyrim (even more so in Fallout 4) that are super duper tough and hard to fight. Instead of single enemies, how about a complete dungeon? How about several complete dungeons with Skulls? This way you show players a challenge that they might not come out of alive, but sure they are free to try or prepare better and come back later. Oh and about that super duper tough enemies, who gives a shit just hit F5 and zerg in until you get lucky or whatever.

Speaking of level up, now you can spend… 1 point between 3 options. WOW truely a deep leveling system. Now since I play mage, I don´t need stamina at all, so should I pick health or magica… oh no what a hard choice!

Bring back Constituion, Willpower and the likes, and make every stat useful for every Character. Maybe I play a warrior, but maybe I still want to spend points into Magic, A: Because that healing spell is super useful and B: It also gives Magic resistance and that helps me against those pesky mages that I have trouble with right now.

Further, Items should also add to these stats. You know, like Diablo. Even better if every stat is useful. You know, that +25 Magic amulet is pretty useless for a warrior, except maybe right now right here because I gotta fight that Mage boss and he deals so much damage that my current amulet is useless. So even as a warrior, it has it´s use.

This would also help the problem of bland items. Because it´s simply no fun getting showered in fucking iron daggers for the first 10 levels, and every single one is 100% exactly the same garbage. This would make you upgrade your items more often and offer even more interesting desicions regarding itemisation. Legendary swords could have legendary effects like spewing fire with every swing.

And it doesn´t stop there, since enemies also wear these items, their variety will also skyrocket. Every Draugr, even though it´s the same exact enemy, will be slightly different. Maybe one has only equipment that gives +Health and he tanks your hits, while an other one has only items that give +Speed so this guy is super quick. And maybe also very rarely a Draugr will spawn with the aforementioned fire spewing sword, that will make a bland Draugr into a terrifying enemy… that gives an extremely nice reward for defeating it. Even better, you KNOW he has it, and you WANT it.

I love playing Mages, but in Skyrim they fucking suck so hard it´s a miracle to me how that sneaked past their QA. Hell, I could probably have a 55kg granite boulder do the QA and even the boulder would fucking realize how shit it is.

The spells are all fucking Copypaste expect a few. What the fuck? Torrent of fire, hmm nice. Torrent of ice, also nice. Torrent of lightning, ok? Wall of fire, classic. Wall of ice, ahh… Wall of fucking lightning? Whoever is responsible for this should be executed by a wall of lightning. And it gets even worse, who thought that this would be possible at that point? I wouldn´t even complain all that much about this if the spells would function different. Wall of fire = dmg when enemies run through. Wall of ice = creates an impassable wall that emits cold around it and slows enemies BUT NOT IN SKYRIM. It does exactly the same fucking thing as wall of fire or wall of lightning except… this time it´s lightning!

Wow, it truely took at least 10 gamedesigners to device such intricate and diverse spells!

But wait… it gets worse still. Now I fight an enemy, I shoot a wall of ice in it´s way and the enemy walks through because it´s not a wall and punches me in the dick. Oh damn I better heal some…

optional you can do similar stuff like gargling down 5 healpotions or eat 57 cheese wheels.

Amazing! Just amazing. What an intense and action packed fight. I really liked the part where I was constantly pausing and unpausing to switch spells for 50% of the fight. Give me a fucking hotbar Bethesda you lazy fucks! While I talk about pausing… menus shouldn´t pause.

Also I hate wands as they work now. They are just a pure hassle to use, they are slow and then end up empty and you need to refill them. Bleh… Make them amplify spells, bigger aoe, longer duration, more range, you name it.

Talking about casting, why can´t warriors or rogues have spells or rather “talents”? Battlecry, a kick move maybe? Something like that. So a warrior would be able to do a bit more than spam leftclick. That would be nice, wouldn´t it?

I don´t mind the idea of not picking a class in the traditional way. There are flaws, but let´s talk Perks first. Almost all of them are passive. You know what the problem with most passives is, you don´t notice them. Especially if it´s just “20% more dmg here”, “20% more dmg there”. Now a few passive perks are no big deal, but almost all of them? And who cares about 20% more damage, when you don´t even notice it because the enemies now have 20% more health? Actually, you pretty much HAVE to pick it. Because else, since the enemies have now 20% more health, you suddenly take longer to kill them. Let that sink in: You level up, and now you are seemingly weaker than before! I know it was even worse in Oblivion but come on…

Instead, Talents and Skills should be leveled up traditionally, offering enough variety for any kind of character (Spellblade, Shadow rogue, whatever)

Some of these Talents should be inherited by your choice of race.

Perks should be kept for non-combat skills, like Pickpocket, Speech, etc. But specifically Smithing, Alchemy and Enchanting have an annoying flaw: Spam 1000000 Iron daggers until you reach level 100 because everything before is not efficient. Crime needs a bit of adjustment. Compared to Oblivion, Skyrim already did it way better, by beeing able to kill witnesses. But sometimes the guards still seem to know things they cannot know. Doing something illegal, you might want to disguise yourself. Wearing some sort of mask for example. Guards and people should get suspect though if you constantly bump into others or just sneakily follow a person for some time with a mask on. So you could disguise yourself, escape and take of the mask, now nobody knows that you were stealing, since they cannot recognize you.

Getting caught for stealing a potato, now you pay 5 gold or go to prison (or fight to death over 5 gold). I think up to a certain amount, there should be no prison unless you don´t have the gold to pay. Maybe you can pay them off with items? Also while murdering a chicken is not nice, the whole town going berserk against you is a bit of an overreaction. They should at most ask for some gold for it and hate you, or you might aswell just refuse to pay and make them hate you even more. They won´t pick a fistfight against a dude with full armor. If you steal items from one end of the map, why can´t I sell it in a normal shop on the other end of the map? It makes no sense, it should be possible if the distance is big enough. When selling to thief guild members, they even pay less, because they know it is stolen but it improves your alignment with the faction.

Factions should be more or less exclusive. In Skyrim you can be a member of the thiefs guild (murdering is evil and absolutely a no-no) aswell as the Dark brotherhood (I will kill you so hard, you will die to death). The thiefs guild even KNOWS this (at least one member) but as it appears it´s ok suddenly.

Favorised actions should increase the standing with the faction, while possibly decrease the standing with other factions who might at some point turn hostile. Faction quests should be only given out if you have reached a certain reputition within the faction. This prevents you from walking into the mages guild where nobody even knows you, blasting to the super hyper Archmage of the whole College all in a matter of 3 days… and still barely know any spells because you don´t even really need them.

Bulletsponge difficulty settings are shit. With the changes to the items, increasing the difficulty would also increase the power of these items. This makes enemies harder, but also increases the reward.

Skyrim isn´t as good as some people seem to think it is. And it really isn´t. It´s painfully mediocre. 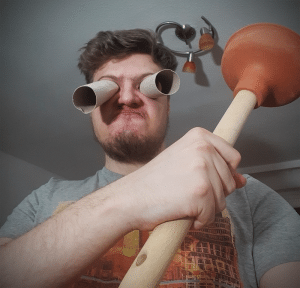